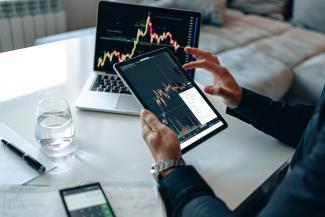 The first part of the period was characterized by an increase in inflation expectations after inflation measures surprised to the upside. Inflation fears were underscored by rising commodity prices. By mid-May, investors mostly agreed that higher inflation would indeed be temporary. The Bank of Canada became the first major central bank to start reducing its asset purchase programs and U.S. Federal Reserve officials surprised investors with a forecast of at least two rate-hikes by the end of 2023. The shift in tone from the central banks suggested they won’t allow the economy to run too hot for too long and helped drive long-term inflation expectations lower. As the inflation narrative shifted, many commodities prices reversed course and the pace of stock gains accelerated. Growth-oriented stocks began once again to outperform value-oriented stocks, which had led market returns since last summer.

The technology sector led the gains in the TSX, mainly due to a surge in the shares of e-commerce giant Shopify Inc. The energy sector was also strong, posting a double-digit percentage gain as oil prices climbed. The health care sector led declining sectors with a double-digit percentage loss. Communication services and information technology were among the strongest sectors in the S&P 500 Index, as several of the internet and technology giants that dominate these sectors climbed to record highs. Underperforming sectors included materials, industrials, utilities and staples.

France led European equity performance, while Germany, Spain and Italy underperformed. The U.K. also saw its market underperform after reporting an economic contraction in the first three months of the year. In the Asia-Pacific region, Australia was top performer, as investors benefited from higher metals prices and the government unveiling of a big-spending budget. Japan underperformed mainly due to a slow vaccine rollout and the re-imposition of emergency measures in some parts of the country.

Fixed income markets were mixed. In most regions, short-term bond yields rose as several central banks either began to reduce stimulative policies or talked about doing so. At the same time however, long-term yields in Canada, the U.S., U.K. and Japan fell and bond prices rose as investors accepted that near-term inflationary pressures would be transitory. As a result, yield curves in those regions flattened. The European Central Bank, on the other hand, renewed its pledge to maintain its emergency bond-buying program at a faster pace than in the first quarter. As a result, yields on long-term euro-bonds increased and European bond prices fell. In most regions, corporate bonds outperformed short- and mid-term government bonds, but lagged long-term government bonds. High yield corporate bonds, which have benefited from both the narrowing of spreads and the improving credit outlook as the economy recovers, logged their fifth consecutive quarter of gains.

The coming quarters continue to look bullish for equity investors. The global economy is in the early stages of a strong, broad and synchronized expansion. Global coronavirus cases are down sharply, and leading economic indicators are pointing to solid growth in key regions. Economies are responding to the lagged impact of massive monetary stimulus and, now, additional fiscal stimulus such as the recent U.S. infrastructure bill. With cyclical sectors expected to outperform, the outlook is especially favourable to the Canadian equity market, which has outperformed the U.S. year-to-date. Fixed-income markets remain at risk of a renewed drift higher of long-term bond yields. However, most central banks believe the current rise in inflation measures will be short-lived and so benchmark interest rates will likely remain steady through most of 2023.